Creativity is something which comes and goes for me, and in many ways it’s one of the few ways I can really unwind after a stressful day. Most of my work tends to be cartography or mountain ranges, but occasionally I’ll dabble with languages as well – making various alphabets and creating new words. So to who dares enter, consider this a fair warning!

As of late I haven’t had an awful lot of time to mess around with my tablet and draw – work has been pretty busy, and I have a map commission for a mate (Which I swear I’ll get done this month!), but I managed to jam out to cheesy 80s music, and get some creativity underway tonight. There’s been an image on my mind for a while of a large mountain range with a fortress fitted inside of it, and I’m starting to get an idea of how it’ll turn out. I like the idea of massive valleys and crevices littered with random tunnels and ruins – in a way that the fortress itself is very much alive and kicking, but just sitting on top of older ruins. There’s an aura of antiquity that I absolutely love, and I’m hoping that when it’s finished (If I ever finish it…), it’ll showcase that accordingly.

In the meantime, I’ve left both the map I’m working on, and my personal project’s progress here. Enjoy! 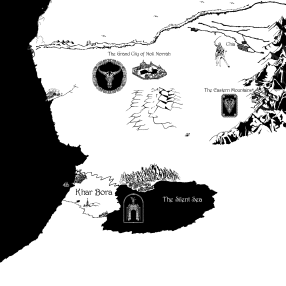 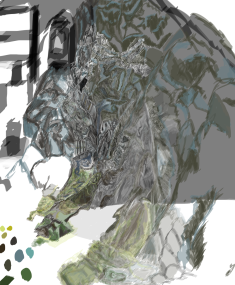